Magic has been part of my life for as long as I can remember. My father was always interested in magic and took any opportunity to blow us away with a new illusion. These initial and early years of my magical education helped me to see the vast possibilities with magic.

Many of the people I meet feel that a magic trick is a test of their intellectual abilities. Whenever a magic trick is performed, they jump up to challenge the magician, claiming to know the secret to the trick. So busy are they in trying to not be fooled that they never even have a chance to actually enjoy the magical experience.  What a loss! I believe this comes from their encounters with misguided magicians who never learned the beauty and elegance of performing real magic. My own magical upbringing is different from theirs!

After seeing dozens and dozens of tricks, my sisters and I became quite the little magical experts, with our own theories as to how the tricks were accomplished. My father always encouraged our theorizing, but never told us how the tricks worked, preferring instead to entice us to heighten our curiosity. Looking back, it seems that he was trying to cultivate within us a new way of looking at the world, to not just view the surface but to dig deep to the foundation of whatever we encountered. Far from trying to fool me by showing me tricks, my father wanted to help me see the opportunities to learn from magic and apply it in my own life. But this never got in the way of our enjoying the tricks.

As I became more interested in performing magic, I also became more aware of how my father designed his ingenious presentations. Knowing his audience – my siblings and me – enabled him to tailor each magic presentation so that we enjoyed the tricks but did not feel he was trying to put one over on us.

This early introduction to magic tricks had an important impact on my own relationship to magic. It made me realize how the same trick can be performed a dozen ways and elicit a dozen different reactions, all based on how the magic trick was presented. A magician’s unique presentation style is an integral part of the impact value of a trick, yet this aspect is often not given enough attention.

So, when my father approached me about forming a company to create magic tricks that amaze people while stimulating their quest for knowledge, I signed on immediately! 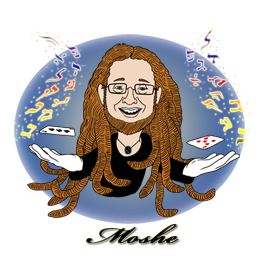